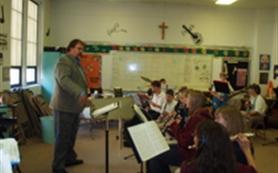 Performances with Anna and Misha Vayman, violin, and Marie Packowski, piano, and the Nebraska Chamber Players.

Steven Trinkle and TBW worked with members of the Omaha Symphony and Lincoln Symphony to help celebrate July 4th.  TBW will be returning to the Meadowlark Festival in 2014.

Music in the Libraries

The public libraries of Washoe, Churchill and Douglas Counties were the sties for a 2 year performance series by the TBW duo.  Performances focused on music from the Baroque to recently written Modern works.

National Endowment for the Arts

During past seasons, a grant from the NEA helped TBW  perform in the old opera houses of Nevada and eastern Sierra communities of Owens Valley (CA) as the salon/theater orchestra, Portable Masterpieces. in 2008-2009, TBW provided performances, clinics, coaching, and seminars for more than 2000 students and teachers in rural Wyoming and guest artist concerts in the schools, in partnership with the Powder River Symphony and financially supported by the Dana Foundation.  In 2017, performances will take place in Caliente, NV (Caliente Union Pacific Train Station), Eureka, NV (Eureka Opera House, Sheridan, WY (WYO Theater), and Casper College with the assistance of an NEA Challenge grant, the Union Pacific Foundation and the Rocky Mountain Power Foundation.

For 10 years TBW visited middle schools and high school throughout Wisconsin on residencies sponsored by the Wisconsin Arts Board through the Artist-in-Education program.  TBW has also served as Artists-in-Education in North Carolina,Kansas, and Missouri.

From 2009 to 2012 produced a festival featuring renowned virtuoso performers and guest artists in concerts and master classes for students in middle school, high school, and college.  Participants competed for scholarship awards and performed in ensembles culminating in a Grand Finale concert with accompaniment by piano, organ, or orchestra.  Festival supporters have included the Yamaha USA, the Harris Foundation, Sam Ash Music, Kessler and Sons, and the Nevada Arts Council.

In 2015, Feste Fantini performed in the Festwoch Klassiche Musik in Oppenau and Offenburg, Germany; 2017 performance include the American Guild of Organists in Las Vegas and Los Angeles, and in 2020, the Casper Chamber Music Society performance in Casper, WY.